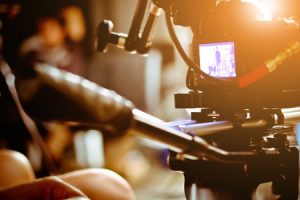 Plenty of TV shows and films are produced both in studios and on the streets of The Windy City. In recent years, TV shows like Chicago Fire, Empire, and Shameless have filmed here, while films like Bad Santa 2, Death Wish, and Rampage have filmed here as well.

If and when you’re filming a production, security needs to be a high priority. After all, you have expensive equipment as well as well-known actors to protect… “shoots” often attract large crowds as well as criminals.

Production sets typically have millions of dollars of equipment on hand. Security personnel can help ensure nothing gets stolen. Do you need bags to be searched? How about exit/entry points guarded? Watchful eyes can keep track of what goes where and when. Meanwhile, if there are “stars” involved, then crowds of people are going to try to gain access to the set, which can spoil a day of filming. Security officers can keep people “at bay,” away from stars as well as the production crew. If there are bothersome fans trying to get to the cast and crew, a security presence won’t let them interrupt the work day. Time is money on a shoot, and interruptions by the public can cost a studio a lot of money– so don’t let that happen!

So much goes into filming, that even having security watch over a parking lot (full of expensive cars) can be helpful. Imagine that you’re a director who pulls up in a Maserati. Obviously, you don’t want someone messing with the car while you’re busy working, so you can have security watch over it, making sure no one attempts to break into it or damage it. Anytime you have a gathering of well-to-do people and their vehicles, thieves will try and target them.

Basically, issues of trespassing, vandalism, theft and potential violence all figure into a movie or TV production set. Even the weather can cause problems, such that having security on site really helps with making sure people and stuff stays secure.

From bodyguard detail to crowd control and then some, hiring professional security officers and having a customized security plan for a film set makes sense. In Chicago, you can trust that LawDog Security will do the job well; please call 773-233-5742 to discuss your needs.