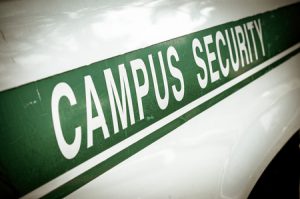 A study in the Chronicle of Higher Education indicated something you probably never think about and probably didn’t even consider… nearly a million college students may now be carrying weapons. It’s a different world than decades ago, isn’t it? In the old days, shootings on campus were almost unheard of, while today, you wouldn’t be surprised to turn on the news and see a campus in lockdown as an active shooter wanders the buildings trying to do harm. Is it any wonder that nearly a million students carry weapons? They’re arming themselves to protect themselves “just in case.”

With that in mind, realize this: colleges are stepping up their security and police patrols, now more than ever. Meanwhile, they’re putting an emphasis on personal safety and crime prevention.

A college campus is a big, public place bustling with people at various hours of the day and night. Why does a college campus need a security presence?

First, a security presence helps raise its profile and reputation. If a person has to choose between attending a school known for roving patrols versus “no security whatsoever,” in this day and age they’re going to go with the college that does something to protect them from potential harm. A college campus that doesn’t emphasize security is at a disadvantage! People expect a college to care about its people, and they can do so by being vigilant about security patrols.

We live in a society with many rules and bylaws. If no one follows these rules and bylaws, chaos ensues. Therefore, it’s vital that college campuses have a strong security presence to monitor the people on campus at all times. Are they following the rules or not? If not, security has to deal with them so they’re not disturbing others. When there are policies needing to be enforced, it’s up to security to enforce them. When there are crowds to be controlled, security should be there making sure things don’t get out of hand.

Finally, having a strong security presence on campus helps deter crime. Criminals don’t go where they’re being watched or monitored because they don’t want to get caught. Therefore, it really helps create a safe environment when there are security officers either walking around a campus or driving around it, which indicates to would-be criminals “we’re watching you.”

« Why Commercial Buildings Should Outsource Their Security
As Construction Theft Continues to Rise, Are You Sure Your Jobsite is Secure? »