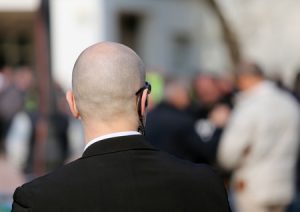 Why are special events a security risk? Typically, special events involve individuals who may be famous or controversial. Take, for instance, political rallies where there are polarizing persons running for office… some people might love them and others might dislike them. A controversial person with “detractors” can attract those who purposely want to cause trouble at their event(s). How about popular musicians, ······performers and/or TV/movie celebrities? When they’re around, crowds can go wild in their presence– creating a mob scene of sorts. Famous people often need security officers to clear a path for them, keep them safe from bodily harm/attacks, and more.

Special events aren’t the norm. That’s why they’re special. Maybe the event is a once-in-a-lifetime thing, whereas you’ll never get the same people together for the same reason ever again. Therefore, everything about the event has a heightened sense of importance. People might be nervous. They might be prone to act out or do things they normally wouldn’t do during mundane, routine events. Security needs to be hyper-vigilant during special events in order to deal with any “surprises.”

Security at special events might include metal detectors, checking bags for weapons, setting up and guarding gates for crowd control/access control, and, of course, parking lots, which often require their own set of rules to be followed. Bad things can even happen in parking lots, such that security needs to be aware of what’s going on “outside the venue” at all times.

Think of how many different people and different groups are involved in a special event. You have caterers. You have people with expensive musical and audio equipment. There can be rich and famous people, as well as thieves. Do background checks need to be run? Who will search people for weapons or drugs? If there’s suspicious behavior, are there security officers around to investigate?

From college campuses to private events held in people’s homes, special events always take time and planning in order to be safe and successful. Security is a major component of any special event today. When there’s extreme weather, alcohol, medical emergencies, and/or fights, doesn’t it make sense for security officers to be on hand, helping control crowds at special events? Of course! Call LawDog Security at 773-233-5742 for help planning your Chicago-area special event’s expert security coverage.